In part 1 of my series on the new foc.us V2 tDCS device, I introduced the basic components of the V2 as well as its user interface. I continue to be pleased with the V2 as a user and want to pass along some ideas related to electrode use.

Foc.us offers two headsets for the V2, the Edge and the Gamer. The EDGE is a special purpose headset designed to facilitate experimentation and research on the use of tDCS to improve athletic ability. As I mentioned in the last post, this is an area of tDCS that is ripe for exploration. A few studies have already been posted that hint at possible uses for tDCS and improvements in physical ability. This will be a very interesting application of tDCS to watch as results from various tests are posted. The EDGE headset is not a general-purpose tDCS headset and should NOT be selected by most users.

The GAMER headset is a more versatile headset for the new or experienced tDCS user. It is made up of a flexible metal band and two electrodes that attach to the band. It is highly adjustable for head-size and comfort. “Out of the box” it is designed to allow stimulation of the pre-frontal cortex, an area associated with memory, learning, etc. It happens that the electrodes of the GAMER can be used independent of the included band – allowing electrode positioning for “savant learning”, treatment of chronic pain, depression, etc. Note: the electrode plainly marked “Left” on the inside of the sponge frame is the anode (+) and the electrode marked “Right” is the cathode (-). 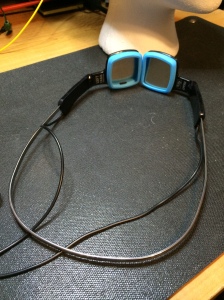 (The Gamer headset.  Best choice for most.)

(The Gamer headset in its case.)

(The Gamer on my “test head”. Note electrodes are positions over the pre-frontal area.)

(You can use the Gamer electrodes without the supplied metal band and place them where you want. Here I’ve used an elastic band to position the electrodes for “savant learning”.)

(Here is another example with the electrodes positioned to treat chronic pain. In this example, the cathode would be placed on the upper arm or shoulder with another band.)

foc.us has updated the firmware on the V2 so that the resistor that tells the tDCS module which headset is connected is no longer needed.  FURTHER – they are also released a patch cable to make attaching 3rd party electrodes even easier. See (  http://www.foc.us/tdcs-tens-cable-adaptor ).  The text below is left for historical reference only.

Using Your Own Electrodes (Amrex)

To test this, I used a small RadioShack proto-board and broke out the 4 conductors for easy investigation and tinkering. I used a 100 and 200 ohm resistor in series to get the 300 ohms needed to let the V2 “think” I am connecting an Edge headset, even though I use popular Amrex 3x3s. Actually it seems not to matter whether the V2 thinks an Edge or Gamer is connected – you can still set all the desired tDCS treatment times and current levels.

(Note the four conductor plug. It is broken out on the proto-board with T, 1, 2, 3 as described above. I use this example with Amrex 3×3 electrodes.)

Perhaps in future firmware, foc.us will include special features for 3rd party headsets that use a different resistance identifier.
BTW Soldering wires to a four conductor, 2.5 mm plug is not for the faint of heart. It’s very easy to short contacts and generally make a mess. I suggest buying a pre-wired 2.5 mm plug from Parts Express (or similar). Their part number is 090-504.

So there you have it. I suggest that you either buy the foc.us GAMER headset with your V2 and use it as is or with your own headband as I have shown above – or do your own thing with a 4 conductor plug and whatever electrodes you prefer.

Please feel free to send along comments and suggestions related to this post or a future one you would like to see.

26 thoughts on “Using the foc.us V2 with the Gamer or Your Own Electrodes”